So it was one day that I’ve got texted and phoned over by my cousin. “Dude, get on Messenger, I’ve got to show you something”. My cousin, Ionel Jinga, is a traditional artist – sculptor –  involved in all kind of crazy art projects, which in the past years got a crush for digital. So he sent me these doodles: 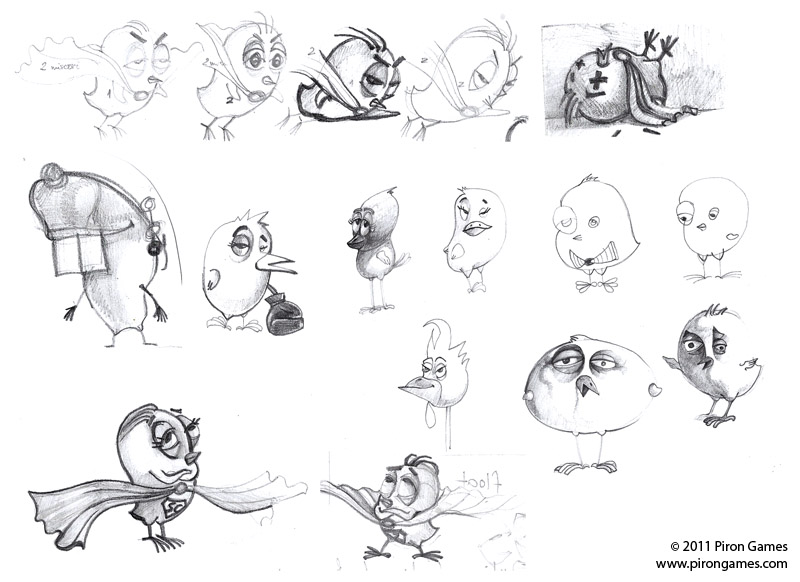 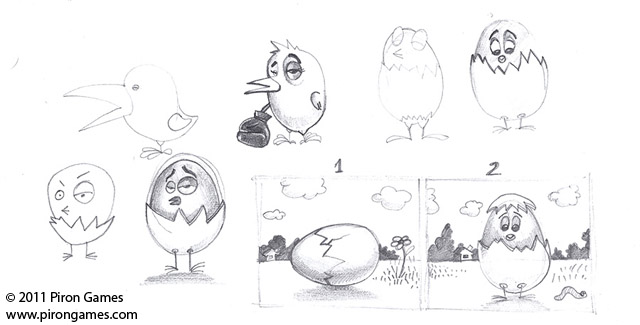 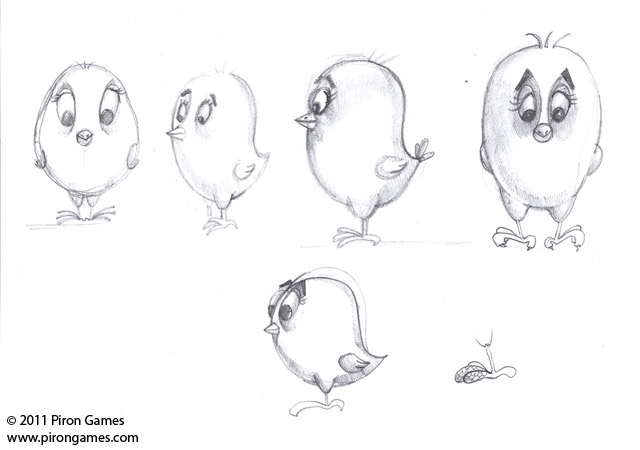 After 30 minutes of “brain storming”, the concept was sketched out. For a long time I’ve been looking to make a classic arena shooter, something like Death vs Monstars, so the whole “SuperChicken the super-hero that saves the world” seemed like an appropriate theme for such a game. “Shooting” and “cartoonish graphics” go very well hand in hand 🙂 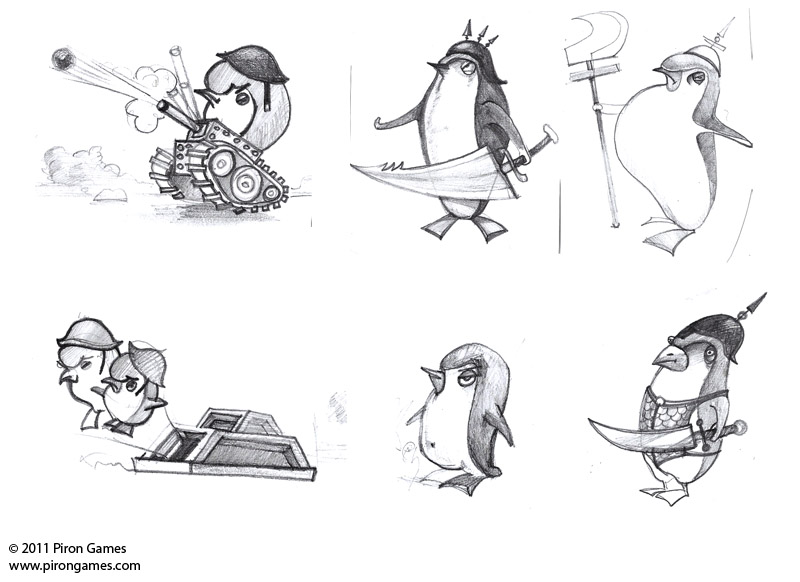 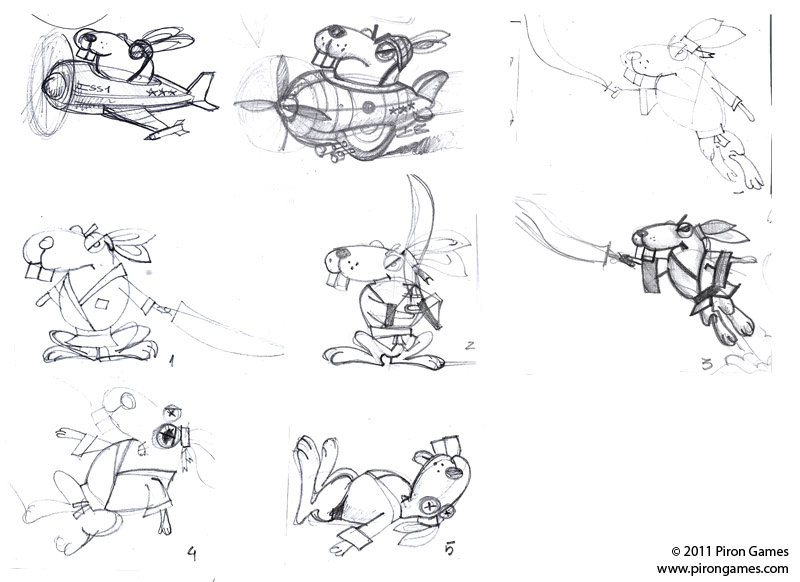 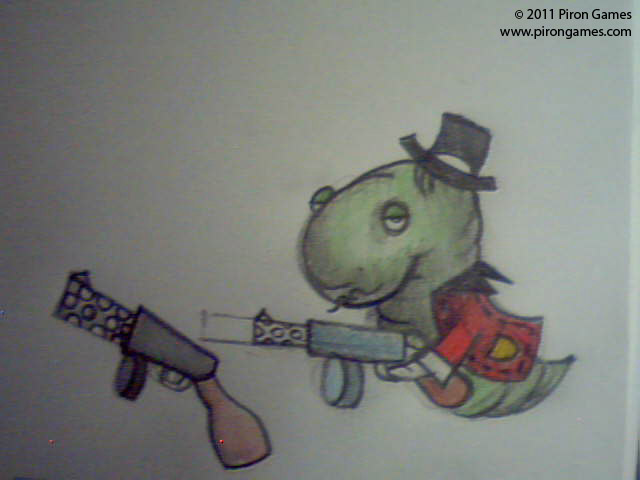 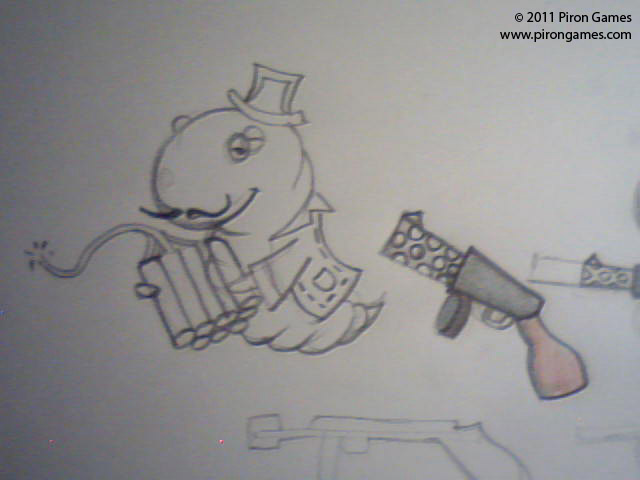 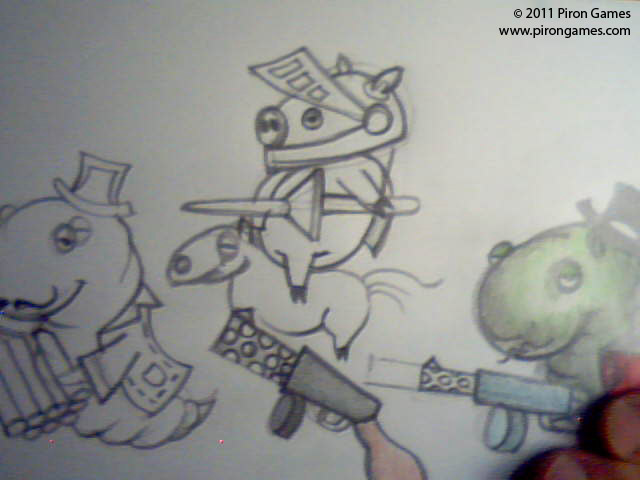 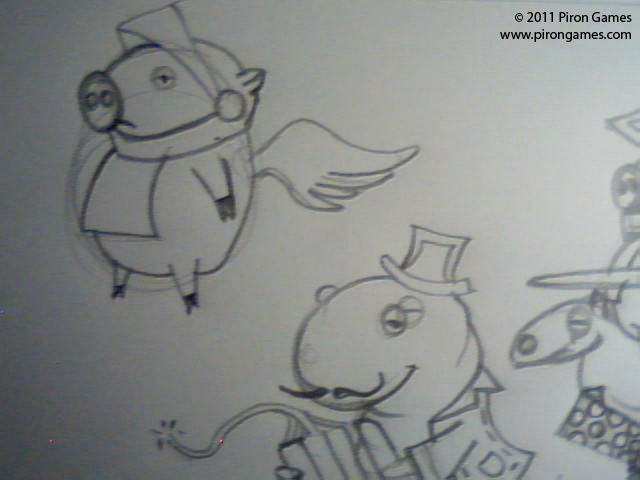 I usually don’t start programming unless I have at least 90% of the art assets ready beforehand. Given that it’s a pretty straightforward concept that isn’t supposed to twist and turn during development, it was very easy to predict the amount of assets required. Alright, that and my years of experience coding and designing games 😀

Cousin warned me that he doesn’t have much experience animating characters, which is understandable since he usually works with stone 😉 That was the only restriction I had when planning for each character animations and since we were not doing assets for a Walt Disney cartoon…it wasn’t much of a problem. 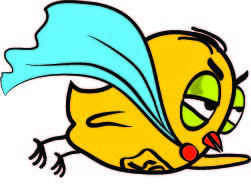 Technically, art was done vectorial. Now, I don’t use vectors in Flash, it’s bitmap sprite sheets all the way. Flash isn’t a rocket and high-quality vectors don’t really help in a bullet-hell where tens of enemies are supposed to swarm the screen. Besides, SamHaXe, the tool used to assemble the assets, is kind of buggy when importing swfs. In fact, it’s not buggy per se, but it adheres very strictly to the SWF format, whereas Adobe doesn’t obey its own standards. I know. Strange 🙂

However, even with mockups in front of me, I had to think in advance around this problem: what if the characters are too small/large? (which kind of matters in a shooter). In the end, it wasn’t needed to resize anything, initial mockups and a very early prototype helped clear out this problem.

There were also small bits of art (bullets, gibs) that I did them myself, while for the Super Dodgeball game mode I called in the art services of my friend Alex Mazilu, who drawed the evil eye 🙂

Art took something around 2 months to complete. This included 10 characters (enemies, heroes, bosses) with ~ 200 animation frames, special effects, user interface design, menu backgrounds and so on. We were supposed to have even an intro movie, but eventually dropped it. After all, everyone knows the story: super-chicken comes in an extra-galactic egg, grows as a big super-hero on Earth, saves the planet and the chicks from evil masterminds, happy ending 🙂

The first problem I had to tackle was my own sprite editor not being able to handle transparent input and export. My previous games (Born of Fire TD, Orbital Decay) had pixel art, more or less, in any case, art without antialiasing on edges. But with cartoonish graphics, non-AA edges look horrid. So back to the C++ and C++Builder to code in support for transparent stuff using GDI+, Gdiplus::Bitmap and whatnot. Windows programming. Ugh 🙂

Second, I was trying to avoid the ActionScript display list because I needed offscreen buffer rendering. The built-in display list is fairly fast, but I think I capped it with Orbital Decay, and this game was certainly going to use more fill-rate power. Which meant I had to roll my own scene graph classes, another thing I was trying to dodge in the past 10 years. Anyway, here comes the jMonkey Engine, a 3D engine written in Java, from which I ported to HaXe some of the scene graph classes, lest the 3D items. Java to HaXe manual port. What a joy! 🙂

Then, I wanted to roll with an Entity-Component System, like the one described here. Unfortunately, I haven’t got around actually implementing it, which proved a mistake. This kind of game fits the terms of use of an ES and by not going ES-way I ended up with lots of boilerplate code. Oh well. Maybe next time 🙂

All in all, programming, game design and final touches took around 3 months(*).

(*)Not actual 3 months, because I’m a lazy bastard that procrastinates way too much 🙂

There’s not much to tell here, since the game doesn’t innovate much. There’s the two heroes with different superpowers, the upgrade system based on a “coin”, couple of game modes, awards…all the works a shooter should have.

Since I’m a hardcore gamer, I usually design the games to be real hard, so even the initial BabyChicken campaign, marked as “easy”, was rather difficult. Enter the aspiring game designer Dabor, a FlashGameLicense user that offers QA services. He pulled some good feedback on the game, which helped polishing and balancing the game to a more casual audience.

Despite the 40 e-mails sent to various portals (and to the ones I’ve done business before with personalized messages, see the poster below), only two replies with “we’re not interested” 😀 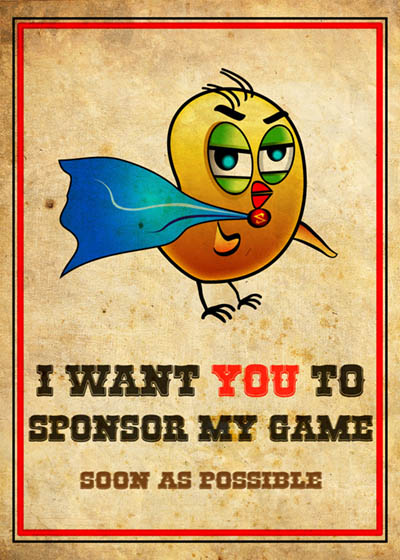 The game was uploaded to FlashGameLicense, where it got a 7.5 editor rating and ~8.6 developer rating. In 3 months it stood in bidding, it got less than 30 sponsor views and only one bid ($600). Needless to say, this game would not get any love, so I decided to went self-sponsor it, like I did with Born of Fire TD before.

I’m content on how the development went. Having a full time artist made the whole process more streamlined and helped me concentrate on programming and design instead.

Being unable to find a sponsor was a show-stopper given the quality of the final product. Since the game just went live in the wild, I can’t say whether it was because arena shooters, in general, aren’t much sought by casual players or because this game in particular has a design flaw. Maybe I’ll elaborate in a couple of months on this matter 🙂